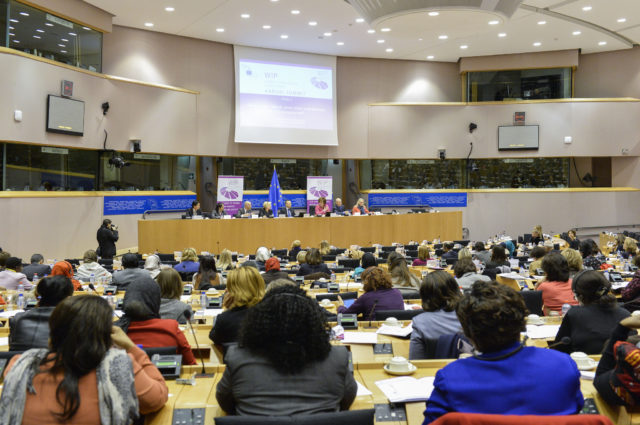 The inaugural “WIP Annual Summit” was the first time in history that all female Parliamentarians in the world were invited to gather in a unique conference in Brussels. Around 600 participants from more than 100 countries came together, which made the WIP Annual Summit an unprecedented occasion to discuss the issues on the Global Agenda from the perspective of female political leaders. Issues that were being addressed reached from “financial markets steered by women” to “women working together in the fight against corruption”.

An outstanding selection of speakers contributed to the Keynote presentations, the five Interactive Plenary Debates, the WIP Award Ceremonies and the Working Groups, including several Nobel Prize Winners, Heads of Government, European Commissioners, Ministers, Academics and high profile representatives of the Civil Society and Philanthropy. The event was co-hosted by the European Parliament and international partners like the UN Development Programme and UN Women, the Inter-Parliamentary Union, Transparency International, the World Economic Forum and the World Bank contributed Working Groups to the programme. Please find the programme online.

120 years ago, on the 28th of November 1893, the women of New Zealand became the first in the world to vote in a national election. To mark this milestone, the Women in Parliaments Global Forum (WIP) hosted its annual summit in the European Parliament. WIP’s mission is to advance society by using the collective strength and ability of over 9000 female Parliamentarians across the world.

The cornerstones of the summit were:

The working groups were organized in cooperation with international partners, such as: